How to Build the FRAMOS Realsense™ SDK (Windows Version)

The software listed below should be installed prior to starting this process:

Start the CMAKE application and input the paths for the source code and build folders. For example:

The picture below shows an example with the paths already inputted in the corresponding fields:

Notice that for the case in which the “Where to build the binaries” folder does not exist, the CMAKE application will ask to create this folder. 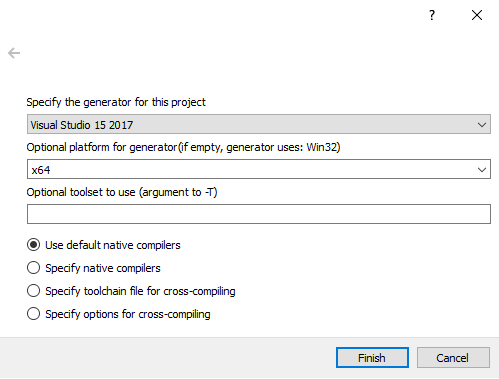 Remove unneeded build flags before generating the project as shown below:

Add the path for the local installation:

The following steps are specific to the MS Visual Studio IDE. If you are using another IDE, you will need to replicate the configuration setup described below as closely as possible.

With the IDE open to your new project, a selection dropdown list is presented for the desired build type:

Once all configurations have been defined, build the complete project. Go to the right menu, select the ALL_BUILD option and then click on Build.

Optional: To create and setup the install folder, select the INSTALL option and then click on Build.

After the build process is complete, go to the path you defined as Install folder and check to ensure that have the same folders listed below:

Go back to the CMAKE application and select the corresponding fields according to the instructions below.

Once all the selections have been made, rebuild the project following the steps in the previous section.

All the needed information can be found in installation directory of the FRAMOS Software package or in the newly created “Install” folder that was generated by the Install build process listed in the previously. Here the picture again

Within your software project, you will need to add references to where all the prerequisite include files (include folder path) and lib files (lib folder path) are stored. Additionally, place all needed DLLs and application executables inside bin folder .

Copy the Python libraries and DLLs, found under /bin folder[DB2] , into the same directory where the python scripts are running.

Did you find it helpful? Yes No

Send feedback
Sorry we couldn't be helpful. Help us improve this article with your feedback.